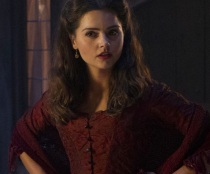 I’ve noticed I frequently post a picture of Doctor Who’s companions on my blog. Lest you think I’m a total lech, the main reason for doing this is to draw attention to my blog. After all, photos of Romana, Rose, Clara (pictured), or Susan have a lot more sex appeal than tintypes of septic tanks. That’s just good ol’ common sense. But there’s something deeper

about my consistent choice of pretty women to punctuate my web logging these days. And that “something” has to do with romance. In New Who — as well as many classic Who episodes with Tom Baker — there is a romantic tension that exists between the Doctor and his Companions. And the Doctor is usually unaware of it. And while he does show considerable affection for his mates on ye olde TARDIS the Doctor doesn’t seem to take a hint very well. You could justify this because he’s not human, or because the stakes are so high that he doesn’t have time for love, or because he’s immortal and will outlive whoever he does fall for. But really, the dude is just clueless. Women notice him, but he doesn’t reciprocate. And this characteristic, rather than being rude or chauvinistic, adds to his charm … or so it would seem.

(I will add parenthetically, which is why this paragraph is in parentheses, that the Doctor does notice his Companions from time-to-time. Clearly he is in deep anguish about Rose. And on a lighter note he chews his wrist off at the sight of Clara’s tight skirt. But these are exceptions, not the rule.)

So why am I so curious? I think it’s because at heart I’m a romantic. I’ve probably always known this, but I really had to admit it after a college friend reviewed my novel (here) and told me that my “adventure” was actually a “romance.” She was right. It turns out — through no fault of my own — that I am fascinated by the interplay between guys and girls. And Doctor Who (the man) is in many ways my own opposite. The beautiful girl is right under his nose and he completely misses her flirting, suggestiveness, or explicit passes.

How am I the opposite? Well, I was the one who noticed the girls back in the day. Another obsession we writers share is people watching. If I were attracted to a girl, no detail was too small to notice: her clothes, her eyeglasses, her legs, her jokes, her snorts, or that (unbelievably) cute way she’d have of tucking her hair under a baseball cap with the pony tail sticking out. And yet, ironically, romance was often elusive as hell.

“It’s not that you’re unattractive, Keith. I just don’t want a relationship right now,” she’d said, right before she started dating the other guy (we’ll call him David).

But this has a happy ending. After crossing that Rubicon from my teens to my twenties, I met the girl of my dreams; I even married her. But I spent many years wanting to be that Doctor Who archetype, that absent-minded, bumbling, good-looking free spirit. Maybe I am some of these things, some of the time. But I am not all of these things all of the time. He is not I, and vice versa in reverse. And we have to live with truths. So, whether you’re a plumber, artist, attorney, Time Lord, burglar, or engineer, it’s important to remember what that succinct bastard William Shakespeare said: “To thine own self be true.” You actually have no choice, no matter how many time machines you have.

The photo and Doctor Who are copyright © 2013 by the BBC 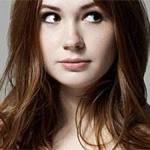 … “You may be a doctor. But I’m the Doctor. The definite article, you might say.” ~ Tom Baker playing the Fourth Doctor

It’s funny how quotes tell you so much about a person; Doctor Who, himself, and Doctor Who, the series, simply oozes quotability.  In fact, there are tumblr pages, blogs, Twitter feeds, and Facebook pages greater than the sum total of their parts dedicated to doing just this.  So, why another?  Because I want to.

Ultimately, what Doctor Who does, via quotes, is to bring out the humanity of the characters even when the show is hip-deep in campy science fiction bullshit.  So, today’s blog is an homage to some of the best lines I’ve heard in my limited time as a Whovian.  The picture of Amy Pond is there because I think she’s hot.  Without further ado, the quotes:

And finally, on logic:

Copyright © 2013 Ketih Parker, except for all the stuff on this page that I don’t own the copyright to.