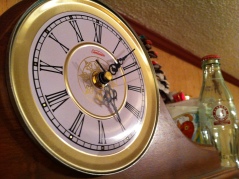 The science of time travel is, of course, weird as hell.  If you physically traveled in time, you’d travel through space as well.  And the solar system is zipping through the galaxy at 490,000 miles per hour.  So, if you travel back in time just one silly-ol’ hour, then you’d better have a space suit with you.  Otherwise you’ll be chewing some hard vacuum because when you get to one hour ago (check your watch), Mother Earth will be some half-million miles away, and fading fast.  But, we could devote our lives talking that crap.
.
Instead, why don’t I dive right in and take a look at some of the best time travel Hollywood has given me over the years.  And since it’s college football season, a poll seemed like a fitting approach to the problem.  Also note that this is my top 5, i.e., these are the movies that are my personal favorites.  This is not meant to be a list to match the critical thinking of film aficionados like Peter Travers, Pauline Kael, Roger Ebert, or Gene Shalit.  Those folks are in a league of their own.  This list simply reflects what I’ve enjoyed most.  So without further ado, my top 5 time travel movies are:
.
.
Back to the Future, of course, is considered a classic by any measure.  And the while the science may not be explained, there was a 1950s-ish quaintness about an eccentric scientist who needs a lightning blast to drive his Delorean back to the good ole days (that weren’t always so good).  The love story was human without being sappy, the humor often understated, and the cliffhanger brilliant.  And for guys my age, Lea Thompson certainly wasn’t hard on the eyes.  My only real complaint was the “fading photograph” device, but it was a decent enough egg-timer to move the plot along.  All in all, the movie was … heavy.
.
Harry Potter and the Prisoner of Azkaban is my favorite Potter movie for two reasons.  First, I think it’s the best adaptation of Rowling’s novels. Second, it addresses one of the neatest notions in time travel: Traveling back and forth over the course of a few hours.  The movie has a coming-of-age angle that I find particularly alluring, probably because I never grew up myself.  I loved watching how Harry, Ron, and (most especially) Hermione develop over the story’s arc.  How many of us, in school, needed a necklace like that.  Or a girlfriend like Hermione?
.
Groundhog Day is a favorite for many of the same reasons as Azkaban, and would own a higher place on my list if it hadn’t been so … repetitive.  But despite not having its final mystery explained in detail, the story still works.  I actually thought the fact that Bill Murray’s character broke out of his cycle by “growing up” was the perfect ending to a very solid work of fiction.
.
Star Trek: First Contact, of course, takes the crew of the Enterprise-E back to post-WW-III earth, and allows us to see what the real Zephram Cochran was like.  Entertaining on many levels, including its tie-in to the Borg plot-line, the movie has a great paradox ending, action, drama, and a helluva lot of good humor.  Maybe the best Trek movie of all, its only drawback is the fact that it is Trek, and that makes me wonder whether it could stand on its own.
.
Bill & Ted’s Excellent Adventure is the kind of time travel satire that Kurt Vonnegut would’ve written if he’d been born to a different generation. How can you not love a story about a pair of near-high-school-dropouts who’ve wrapped themselves in enough time paradoxes to change the course of physics, and just don’t care? All for the purpose of finishing a class paper.  Priceless!
.
So, for what it’s worth, those are my favorite time travel movies.  The two lists that follow will give you an idea of some other movies that I enjoyed but didn’t make it to the top 5 for various reasons.  And below that is a bucket list of time travel movies that I have not seen.  If only I had more time …
.
.
And here’s my Bucket List, movies that will find their way to me one way or the other …
.
.
Until next time, or last time,
Peace,
from Keith
Copyright © 2012 Alan Keith Parker.  Steal my stuff now, steal my stuff later, I’ll come after you … I know how to generate 1.61 GW, after all.