The answer to both questions is the same: There is no arc!

It took me a painfully long time (decades) to realize just how important this is.  Oh. excuse me.  I’m not talking about the word “is”.   Such danglers were deftly addressed by Bill Clinton and his handler in the 1990s.

No, I mean “arc” as in something that is shaped like the natural bridge above.

In all good fiction and creative nonfiction, the main character (known    the world over as the protagonist) will undergo a series of ups and downs that seem to make people want to think of a bridge.  Be damned if I know why that image comes to mind, but it does.

So, any-hoooo …. How does this apply to Indiana Jones and campfire stories?

When Raiders of the Lost Ark begins Indy is an archeology professor who knows that ancient relics can hold dark, sinister secrets.

When Raiders of the Lost Ark ends Indy is an archeology professor who knows that ancient relics can hold dark, sinister secrets.

Indiana Jones does not change.  For that matter, he doesn’t even get the Ark (pun intended) … although he does get the girl.

Now, what does any of this have to do with campfire stories?  Well, campfire stories may contain surprises or twists, but beyond that these tales invariably fall flat.  Believe me.  I have written a lot of fiction that has fallen flat.  I know what I’m talking about.

But couldn’t we ask a question?  What if Indiana did have a character arc?

What if – during the first movie – we discover that Indiana Jones became violently  anti-communist after his wife was killed at a Communist Party riot during the über-violence that thunderstruck America in the 1930s.  As Indy is torn apart by grief, his politics gravitate away from the leftwing, away from the socialists and communists who have killed his wife.

And then, in the midst of despair, an opportunity:  His country calls and Indy answers.  What better way to overcome grief and angst than embark go on a quest to help America as we inch toward global war?

But as the movie progresses, Indy cannot help his feelings.  He fights the Nazis and their cohorts for the Ark, but while doing so he’s also intrigued by their law, order, discipline, and the freedom they offer from the socialists, unionists, liberals, and other “undesirables”.   Indy tacks harder and harder Right, eventually succumbing to the sadistic rightwing of Hitler’s fascism.  He betrays his American friends, betrays his country, and returns to Germany with the Ark of the Covenant in tow.

At the end of the movie, instead of standing on the steps of the U.S. Capitol being frustrated with Congressional bureaucracy, we see him being given an Iron Cross by Adolf Hitler himself at the 1936 Berlin Olympics.  But then — in a final surge of sanity — Indy sees the revulsion of the German people as a black American wins a gold medal, and Indy suddenly realizes the horror of his extremism.  So while on the podium, he leaps at Hitler, attempting to kill the bastard even while the SS guards shoot Indy dead. 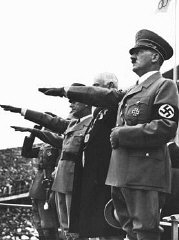 Now that, my friends, would be a character arc.  It’s dark and ominous, but it is an arc.

I bet you guys didn’t expect the blog to take this kind of a twisted twisty twist, did you?

Quite frankly, neither did I.

This was made up on the spot.  And while the plot is a little heavy-handed, it’s an example of one of the things I love about creative writing.  You can shut down those logical/left-brained circuits and let your subconscious do the talking.

And that, my friends, is my answer to Monday’s micro-blog.  It’d make a good campfire story, wouldn’t it?